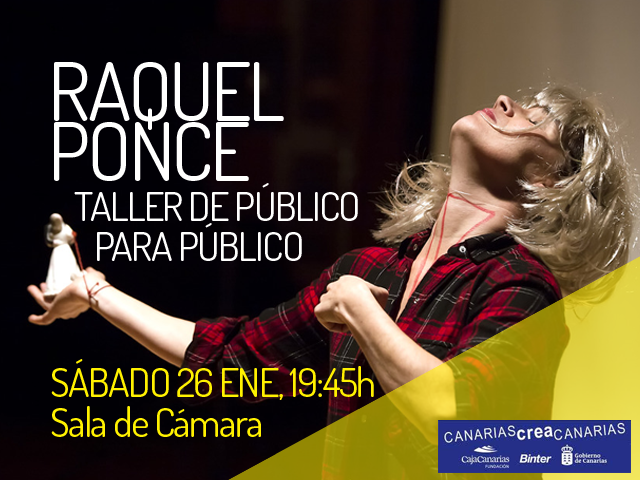 Degree in History of Art. She forms and works as a dancer, actress and stage director in the Canary Islands and Madrid. Artist in residence at the Production Studios of the La Regenta Art Center. Active member and co-founder of the independent artistic collective “El Hueco”;Co- founder of the company of new scenic tendencies “Perro Verde”. Interpreter of numerous dance and performance shows, including those performed with Gary Stevens (And), Xavier Le Roy (Extensions, Proyect), and Tino Seghal presented in different European cities (Amsterdam, Lisbon, Paris, Brussels, Berlin, Stockholm , Geneva …) As a creator she has performed and performed the stage pieces “La última vez de siempre”,

“Another stupid American film”, “Artematón”, “Cervezas gratis”, “Narcisa” “Untitled”; and “Backstage” among others. He has carried out projects of an expository character among which stand out “BACK”  presented at the CAAM / Las Palmas de Gran Canaria, El Tanque / Santa Cruz de Tenerife and the Biennial of the Moving Image (BIM) Buenos Aires- Argentina, “Corpografías” presented at

the “Area 60” space at the TEA and in the section “Digital night”, Santa Cruz de Tenerife, “Drawing”;presented at the Art Biennial of Dakar (Senegal).

The public chooses the artist, chooses and decides what they want to see, the time they want to be in front of a creation. But who chooses the public? Can the artist choose it? In case of being able to do it, what kind of public does the artist need for each of his works? Can we “all” be public for &quot;all&quot; artistic works? Can you learn to be an alternative, emerging, experimental, autonomous and independent public? Is there a professional and amateur audience?

A theoretical-practical proposal about the role and importance of the public as a modifier and transformer of the artistic result. A scenic piece, which is built and takes shape in its own moment and in-situ. It is not something previously formed, but it depends on the spectators- participants themselves, who take one or the other direction. A scenic piece that takes the methodology and tools of a workshop and a talk-conference. A public workshop, for the public, in which to put into practice, deepen and transform the different postures, behaviors and acts- habits that we have as spectators.