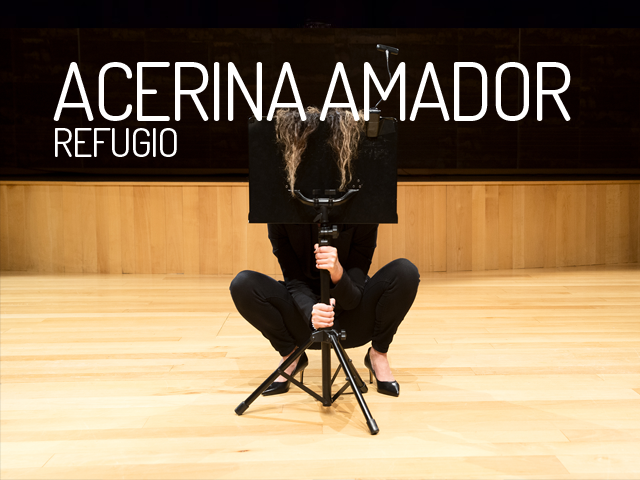 Born in Tenerife, Canary Islands, she trained as a dancer at the Victoria Theater (Tenerife), Dock 11 (Berlin) and Area (Barcelona) before being selected for the PEPCC program (Pesquiça e Criaçao Choreographic Program), forming with Deborah Hay , Meg Stuart, Joao Fiadeiro, Loic Touzé, Emmanuelle Huyhn, Miguel Pereira, Mark Tompkins, Nuno Bizarro, Claudia Dias, Lisa Nelson, Jeremy Nelson, André Lepecki, Vera Mantero, among many other artists of the international scene. Later she received a scholarship from the Master in Performing Practices and Visual Culture of the University of Alcalá de Henares and the Reina Sofía Museum, directed by Victoria Pérez Royo and José Sánchez, with Juan Domínguez and Marten Spangberg, among others. As an actress, she has trained at The Neighborhood Playhouse Conservatory and The Susan Batson Studio, both centers in New York.
Acerina has worked with among others, Deborah Hay, Marco Berretini, Michelle Boulé, Miguel Pereira, Mariana Tengner Barros, Wojtekz Ziemilski, Mauricio Glez, Viviana Moin, Javier Caro Ceice, Vera Mantero, Superamas, visual artist Josep María Martín, and jazz composer Carlos Barretto. His work, Strange Pleasures I repeat Strange Pleasures, By the way do Vermelho, Les Stripteases by Aidi Eisidi, Any Past Time Seems Better, Zoom in & Close Up has been presented in different contexts in Europe, China, Cuba, South Africa and New York. She has received the Danceweb residency and scholarship in 2009 and again in 2013 and has been invited to several international meetings of choreographers such as SKITE, directed by Jean Marc Adolphe in Caen (France) 2010, Interferences in Mexico and No Borders in Xiamen (China). He has taught seminars on choreographic creation at the University of Havana, at the International Encounter of dance choreographers in construction (Santa Clara, Cuba), at the University of Johannesburg and has given a master class to the dance company Dance into Dance Mophatong ( South Africa), and at the National Museum of Art in Tanzania to the resident company.
He coordinated the International Vangelis Legakis project in Tenerife and created the series round tables and conferences “Identity and Borders, a look from the contemporary”; and “From the center to the periphery: Borders and Mobility.”
In 2016 Strange Pleasures I repeat Strange Pleasures was exhibited at the Center for Performance Research in New York. She combines his scenic work with Psychology and the defense of the Rights of the Earth and non-human animals.

Now she is working with argentinian choreographer Fabiana Capriotti in a cocreation to premiere in 2019.

We are facing an investigation driven by curiosity and fascination with the work of four thinkers: Donna Haraway, Vinciane Despret, Tristan Garcia and Ilda Teresa de Castro. It arises from the need to create a space of common reflection around the human-non-human animal theme and the integration of this dichotomy, in a careful choreographic score made by a body adjusted in the Capitalist-Preapocalíptica Era and with longings of nests and jungle.

A burst of light effect before the possibility of really staying together in this.

A delicate song to communion.