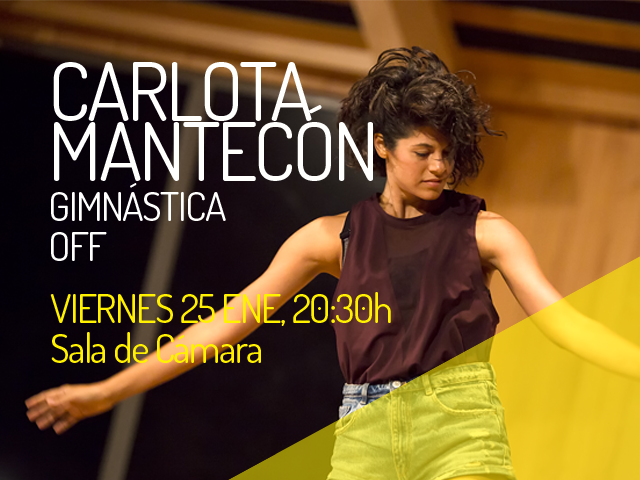 Carlota Mantecón (1984) was born in Tenerife, Spain. Artist working in the field of choreography and performing arts. Since 2010 combines collaborations with her ownwork. Her work focuses on the investigation of the body in movement, in dialogue with other artistic and though disciplines. Her studies: One Year Certificate in Higher Education and PG in Performance in London Contemporary Dance School (LCDS). Three years course in AREA Espai de Danza i Creacio, Barcelona. Other creative spaces in the city like LA PODEROSA and LA CALDERA.

Choreography // In 2018 her new solo Project : “Gimnástica OFF” , has been supported by three different spaces with residencies: LA Caldera (Barcelona), Leal Lav, Centro Parraga (Murcia), the premier will be at the Auditorium of Tenerife in 2019. // BEGGINERS· Women older than 65 years old scene practice project presented in Leal Lav. 2017, continuos supported in 2018 by Participacion Ciudadana and Festival Eima (Mallorca) // BETEWEEN Nadia and I presented in Teatro Leal 2017// 2016 Dancer for a Research Project by Carmelo Salazar (Director of La Porta)// THE EXERCISE OF LOVE, premiere in November 2015 and co-produced by Teatro Guimerá. Invited to participate in SPANISHMATCHBOX (Norway, 2016). THE SAVAGE SPIRIT OF THE CENTAUR research project working residency in Leal Lav. 2013 // LIVE (en vivo) premiere in April 2014, Teatro Victoria, Spain. //WOW performative work with Masu Fajardo. Antic Teatre, Barcelona, 2014. WITH OUT YOU// performative work with Masu Fajardo, Teatro Guimera 2013// FAITH (a piece about trust), co-produced by Auditorio de Tenerife Adán Martín, winner of two REPLICA AWARDS in 2013: The best performance and The best choreography. Collaboration as movement researcher with Jessie Brett in //FIRE SHADOW SILENCE, selected by BE FESTIVAL 2010 and in //AWAKE IN THE DREAM supported by the Arts Council of Wales and winner of an award in CERTAMEN COREOGRÁFICO DE MADRID 2012. Italian tour with //OFELIA’S HEART in 2010. Collaborations with other artists: Jesús Rubio, Élida Dorta, Masu Fajardo ,Teresa Lorenzo, Javier Caro, Simone Marin and Dee Ka Woong. Recently has worked for the choreographer  Carmelo Salazar, as a dancer, in a an artistic dance research.

Gymnastics OFF, is a work in progress of body and movement (contemporary dance) that is getting far away from narrative meanings in order to search for a more abstract space. It was born from an inicial score tittled BETWEEN Nadia and Me, using the reference of the gymnast Nadia Comaneci in order to search for movement materials and reorganiced and rethink them, like an anti-points action and an acto of transforming the gymnastic movement in a new versión of movement in presence and lightness. This Project has been alive since the end of 2017 and has been supported during the whole 2018 by different creative spaces around Spain with four Creative Residencies in: La Caldera Les Corts (Barcelona), Teatro Victoria (Tenerife), LEAL LAV (Tenerife) and Centro Párraga (Murcia). Gymnastics OFF is going to be co-produced by the Audiorio de Tenerife Adán Martín in 2019 and the premier will be in FAM Festival. During the process of research and creation I invited to work with me the choreographer Carmelo Salazar few times to be my coucher and I has also been working with the musician Luz Prado.